"A spiritual Master is an all-illumining torch-gift from the Father Heaven to the Mother Earth." – Sri Chinmoy. 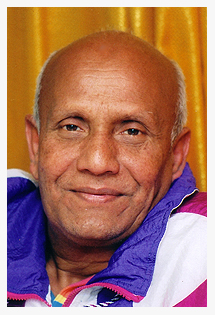 Much esteemed for his wide-ranging efforts to foster world harmony and his great love and compassion for humanity, Sri Chinmoy touched countless lives through his music, art, poetry, his numerous published literary works and his athletic endeavours. His life and accomplishments are testimony to the ideal of self-transcendence and the limitless capacities of the inner life.

Born in the humble village of Shakpura, East Bengal (now Bangladesh) in 1931, Sri Chinmoy has inspired whole generations with his simple and powerful message of world peace, a belief in the beauty and nobility of the soul and his teachings on meditation as a tool for inner peace.

One of India's great luminaries, Sri Chinmoy travelled the world (visiting New Zealand four times in 1987, 1989, 2005 and 2002/03) and formed enduring friendships with people from all walks of life. And while he worked tirelessly to inspire and uplift others, Sri Chinmoy wished to be remembered as a 'student of peace'. In his own words:

"People say that I am an ambassador of peace, but that is not true; I am a student of peace. Only a student can always go on learning. Every day, every hour, every minute and every second I am learning to see, feel and become one with the new light and delight that the message of universal peace is offering to me and to humanity. I am a student of peace and I wish to remain so forever and forever, for peace is a reality that is constantly transcending its own high, higher, highest heights." (Source)

During his lifetime, Sri Chinmoy founded a number of inspirational community service and outreach initiatives. These include: 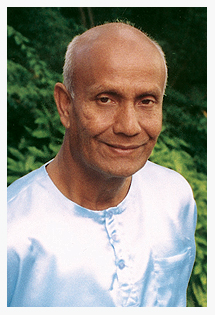 Sri Chinmoy passed away at his home in Jamaica, New York, on October the 11th, 2007, aged 76. He left a remarkable legacy of writings, songs, paintings and spiritual teachings to guide and inspire humanity for ages to come. "The fulness of life," Sri Chinmoy once wrote, "lies in dreaming and manifesting the impossible dreams." His dream was the loftiest of all, a world of peace – and to manifest that dream he became a truly global man of our times, sparing nothing for himself in a life of unanswered love, service and inspiration.

"Sri Chinmoy was a great man. God is smiling to know the immense good he has accomplished and encouraged in others. In a world of suspicion, hostility and conflict, he worked tirelessly to bring the different faiths together and inspired many to emulate."

During a radio interview in 1991, Sri Chinmoy was asked to sum up his philosophy and answered with this comment:

The theme of acceptance is one of the quinessential aspects of Sri Chinmoy's life and legacy. In January 1998, while staying in Guatemala City, Sri Chinmoy was asked by the media to sum up his philosophy in one sentence and he responded with this statement:

"Our philosophy is the acceptance of life for the transformation of life and also for the manifestation of God's Light here on earth, at God's choice Hour in God's own Way." (Source)

Sri Chinmoy – a short biography from Vasudeva Server on Vimeo.

A Day in the Life of Sri Chinmoy

A Day in the Life of Sri Chinmoy from Vasudeva Server on Vimeo.

A Day in the Life of Sri Chinmoy was originally produced in 16mm format in the 1970s. It portrays Sri Chinmoy's early activities with special attention being given to his Jharna Kala (Bengali for 'Fountain Art'), which was a relatively new project at the time. This video also includes private meditations and a variety of other activities.

Who is This Man? – Sri Chinmoy

Who is this man? – Sri Chinmoy from Vasudeva Server on Vimeo.

This video covers some of Sri Chinmoy's activities since he arrived in the West in 1964. Including are his efforts for world peace, his weight-lifting, his artwork and some of his television appearances. Although many of his later achievements are not included (the video was produced in the 1990s), this fifteen minute video clip offers a well-rounded impression of Sri Chinmoy's life and activities.

Sri Chinmoy on religion, love of God and the path of the heart

Sri Chinmoy on religion, love of God, and the path of the heart from Vasudeva Server on Vimeo.

In this interview excerpt, Sri Chinmoy talks about the role of the Guru or spiritual teacher. He also comments that he himself does not teach religion as such, but a way of life based on prayer and meditation. Despite growing up in a Hindu family, he feels that his only religion is love of God, and that all religions at their core are expressions of this sentiment. He also explains his path of the heart, which is to love and serve God inside everyone and to see the good in each and every human being.

New York congressman Gary Ackerman (served from 1983 to 2013) offers a heart-felt tribute to his dear brother-friend Sri Chinmoy two days after the Master's passing. Congressman Ackerman's tribute was an opening address at the international gathering of Sri Chinmoy's students and friends at Aspiration-Ground in Jamaica, New York, where so much of the Master's dynamic peace-serving life had played out during his 43 years in the West.